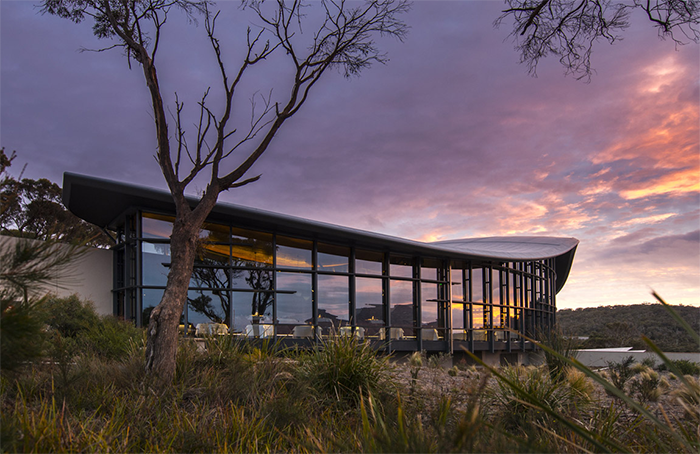 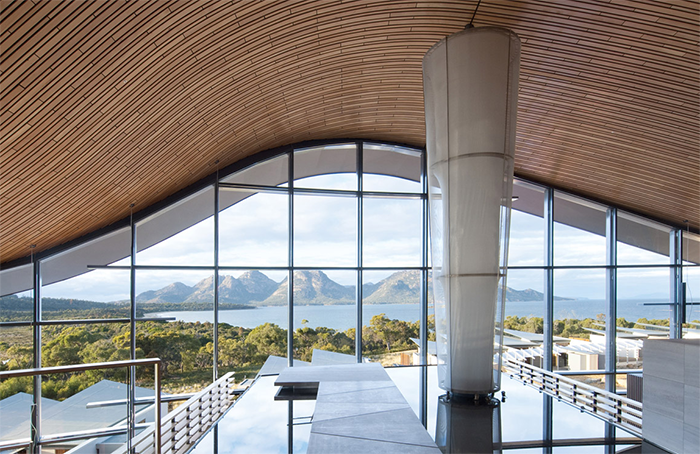 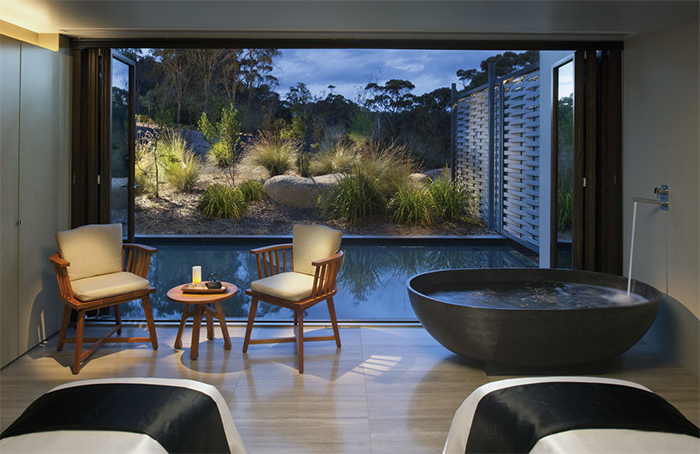 Set in the Coles Bay Conservation Area, this upscale, scenic resort is a 2-minute walk from the beach.

Resting unobtrusively at the edge of one of Australia’s most celebrated national parks, the luxurious Saffire Freycinet resort has been designed to achieve the ultimate in amenity, privacy and relaxation for its limited number of guests.

Located toward the northern end of Tasmania’s famed Freycinet Peninsula is one of the world’s most unique, luxury hotels. Overlooking Coles Bay and the pink and red granite peaks of the Hazards mountain range, the Saffire Freycinet resort has been designed to take full advantage of its spectacular location whilst delivering an exceptional level of amenity to its guests. With just twenty couples accommodated at any one time, the size and intimacy afforded by this boutique resort befits the seeming fragility of its natural setting.

According to its award-winning Tasmanian architects, Circa Morris-Nunn, the resort was imagined as an iconic project to redefine tourism in Tasmania. That it won the Hotel of the Year at the World Architecture News Awards (UK) in 2011, and has consistently featured in the top hotels lists of international travel magazines goes some way to achieving this objective.

On the site of a disused caravan park, Circa Morris-Nunn say the Saffire Freycinet project was as much about repairing the site and interpreting its unique qualities as it was about creating a space from which it could be experienced. “With this in mind, we shaped the main building as the end point in a journey, in which views of the Hazards are shielded and revealed and finally presented as a destination, which is a panoramic overview of the Hazards and their context.”

The design of the resort is conceptually organic and reflects the surrounding environment by evoking a connection to the sea and the rugged nature of the mountains that dominate the landscape. This theme is evident in the elegant, stingray shape of the main building that houses the resort’s reception, dining spaces, guest lounges, bar and health spa. Here, the mountains appear to frame the roof line and the tail of the building provides a welcome entry point to the resort.

The building’s roof, made from curved Tasmanian wood beams, features a ribbed structure with ply overlay that forms a smooth underlay for the Polymea membrane. At the southern façade (under the stingray’s wings if you like) is a three-storey high wall of glass that allows guests to take in an uninterrupted panorama of Coles Bay, the Hazards and the peninsula beyond.

Beyond the main building, as if breaking on the shore, is the wave-like configuration of the luxurious guest suites.

Organised in pairs and connected to the main building by a crescent-shaped covered walkway that extends to the beach, they provide for three levels of accommodation – deluxe, luxury and premium. Each suite ranges in size from 80m² to 140m² and has been designed to take best advantage of the breathtaking views with expansive glazing throughout, whilst maintaining a high level of ownership and privacy from neighbouring suites.

Among a number of requirements inherent in the challenging project brief was the delivery of luxurious amenity across all levels of the project.

While this achievement is immediately visible through the use of high-end furnishings and finishes that reflect the landscape and contribute to a relaxed ambience, much of what makes Saffire Freycinet resort so luxurious remains concealed. This includes the provision of an indoor environment quality, both in the different spaces of the main building and the guest suites, that maintains a high level of comfort whilst not imposing on the aesthetics of these spaces.

The architectural form of the main building, as well as its varying uses and elements such as pools and ponds, conspired to create a number of challenges for the project’s building services and ESD consultants, Wood & Grieve Engineers. Among them was the concealment of services whilst ensuring thermal conditions were maintained. “The unusual form together with the large extent of south-facing glazing meant that a significant amount of design effort was invested into the final solution,” says Grant Holman, Director with Wood & Grieve.

This required a considerable amount of collaboration between engineer and architect to achieve the aesthetic outcome desired, whilst ensuring that systems were able to be installed such that they would perform as required. “The curved shape and the roof profile meant that the architect was unwilling to have any services penetrate through the roof, nor did they want anything to affect the visual aesthetic for the guests,” he says. This required an unusual configuration and layout of services across the three levels of the main building.

A main plant room was located on the ground floor to house the three 3-pipe Daikin VRV heat recovery ducted units, a small number of single split units (to serve back of house areas) and concealed fan coils serving the various guest spaces. A stand alone plant room, located in the “tail-end” of the building near the main entrance, was designed to conceal all condenser units and minimise issues of frost and de-icing. All exhaust discharges were grouped in another area away from view, avoiding the need to penetrate the roof. “In all there are 34 indoor units made up of ducted, ceiling cassette, floor mounted and high wall indoor units,” says Brett James, divisional manager with mechanical services contractor Degree C. “Generally the ducted systems serve the public spaces and the individual indoor heads serve back of house rooms.”

According to James, a common return air path was incorporated into an architecturally designed, perforated metal funnel located centrally at ceiling level within the first floor function area. He says this feature acts as a return air catchment point, where the air is then ducted within the ground floor ceiling space back to the ground floor plant room.

Among a number of the spaces within the main building to create unique challenges for Wood & Grieve, the floor to ceiling glazing that delivers the resort’s most panoramic view of the bay and mountains was one. “A great deal of effort was placed into ensuring that the large expanse of south facing façade was adequately treated,” Holman says

Unable to deliver air within close proximity of the glazing, computer modeling was conducted to avoid condensation from forming on the glass, whilst achieving the required indoor comfort levels. Wood & Grieve worked closely with the diffuser manufacturer to find a solution that would achieve adequate throw without creating a draft, particularly in areas where guests were seated. Careful diffuser placement, good glazing performance and correct discharge velocity were all critical in achieving the desired outcome.

n the guest lounges and dining spaces, conditioned air is delivered via low level grilles located in the joinery unit kick spaces as well as discreet wall grilles. Other areas are served by overhead delivery via grilles incorporated into the architecture. Holman says that although the design temperatures within these spaces allow for typical comfort conditions, given some systems use underfloor delivery, the off coil air temperature had to be managed to ensure the VRV system didn’t drive it too low in cooling.

Due to the building’s multiple levels and uses, the control of economy cycles was carefully selected so as to manage the impact of pressurisation across the space. “The main challenges came in balancing the airside of the systems in terms of overall pressurisation, together with the design of a common economy cycle for the main building,” he says. “Interfaces with the individual systems heating and cooling signals and space temperatures was also a challenge.”

According to James, the control of the mechanical services required the use of both a Daikin intelligent touch (iTouch) controller, and a separate DDC (direct digital control) control system. “As there was a requirement to control fresh air, return air, de-stratification temperature control and economy cycle control for the ducted systems,” he says. “We therefore incorporated the use of a DDC control system into the overall building control.”

Again, concealment of services in these spaces was deemed paramount, with each of these systems connected to 45 concealed, floor-mounted indoor units located across the suites. Often located in bedroom areas, these boxes were acoustically treated to prevent the gurgling sounds that VRV systems sometimes emit.

Fan coil units, mostly of the vertical bulkhead unit type, were concealed within the walls and upstands dividing the spaces. The condenser units were located in external service pods, concealed from view yet readily accessible for maintenance without impacting on guest amenity or privacy. Refrigeration piping and associated electrical cabling serving each suite was installed underground, achieved by enclosing and sealing each 3-pipe VRV piping system within 150mm diameter PVC piping conduits.

Again, Holman says ensuring the air delivery did not create a draft in the guest suites proved challenging. “Some of the low level delivery systems were a challenge that we worked through with the diffuser manufacturer,” he says.

Design temperatures allow for standard comfort conditions in each suite, but with good flexibility to suit guest preferences, with individual temperature control provided.

According to Holman, the total capacity of all VRV systems across the resort is around 370kW; including spare capacity to allow for de-rating under defrost cycle. He says the specification of Daikin systems by Wood & Grieve largely came about due to the limited energy sources available at the site. “The lack of connected gas meant that using heating hot water was not an option,” Holman says. He says the advantages of heat recovery given the various zones within the building were also a contributor. “We worked through with Daikin in terms of capacity and location, as well as protection of the condensers to manage any reduced capacity during winter de-ice.”

The ability to remote diagnose faults with these systems was also deemed an important feature, and meant maintenance technicians could attend the site already armed with any required part. This is particularly important given the remote location of the resort. Holman says considerable effort was put into the commissioning of the systems by the mechanical contractor, so as to ensure they operated as expected over the full operation range. “The mechanical contractor had a lot to do with the good outcome,” he says.

Since Saffire Freycinet resort was completed in September 2010, the entire air conditioning and exhaust system is reported to have operated as designed and been generally free of any issues.