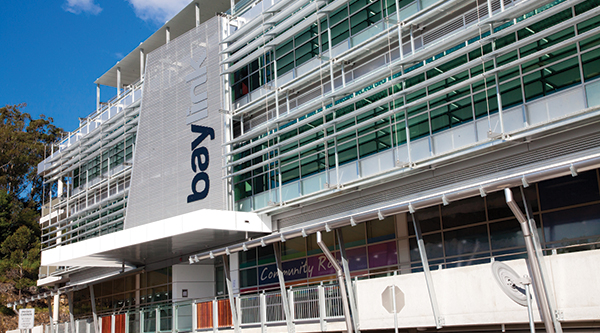 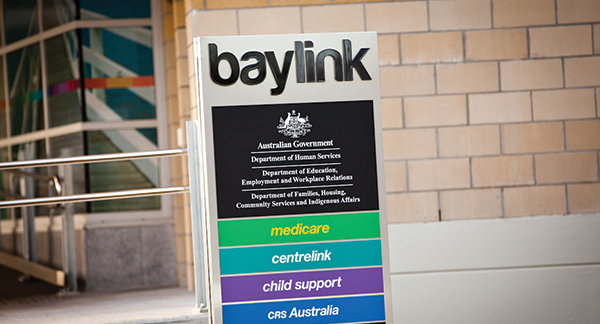 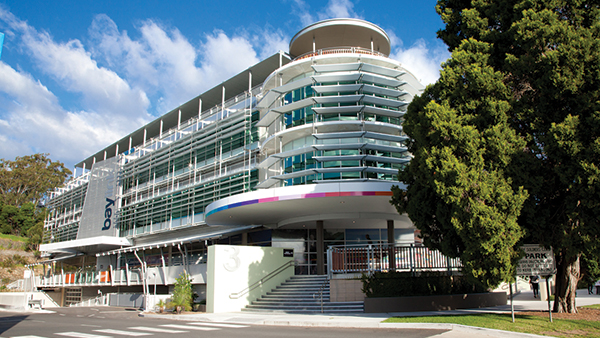 A state-of-the-art building on the south coast of NSW has been designed for best practice in service delivery by bringing the area’s commonwealth and state government services and community agencies together under one roof.

As is so often the case in Australian country towns, the local Returned and Services League (RSL) club plays an important community role, and the Batemans Bay Soldier’s Club is no exception.

Occupying a site in the centre of town with sweeping views across the Clyde River, the Soldier’s Club is the largest of its type in the south coast region and features a bistro, various lounges, auditorium, conference facilities and accommodation.

However the club has extended its community reach by building a $19.5 million state-of-the-art community services hub on vacant land at the rear of the club fronting Flora Crescent. ‘baylink’, as the building has come to be known, brings together all of the Department of Human Services programs and services for the region under one roof. These include Centrelink, Medicare, Child Support and CRS Australia.

The building is also home to a number of other Commonwealth Government and State Government departments, and plays host to not-for-profit and local community organisations too. This unique grouping is an Australian first, achieved under the Australian Government’s Service Delivery Reform Agenda. It is said to represent best practice in collaborative service delivery.

The baylink building project was first conceived in mid 2007 when the management of the Soldier’s Club responded to a Government advertisement seeking tenders in the construction of a 3,800m² commercial office building in Batemans Bay.

Working to guidelines provided by the Department of Human Services, the concept design was developed by Robertson + Marks Architects, who had previously completed a major redevelopment of the Soldier’s Club.

Wallis and Spratt consulting engineers were also engaged during the design phase to provide mechanical services engineering on the project. Among a number of requirements, the guidelines called for an energy efficient design to achieve a minimum 4.5 star NABERS (National Australian Built Environment Rating System) Energy rating. This was later changed to a 5 star rating. In 2008, the Batemans Bay Soldier’s Club was awarded the tender to build and then lease the building to the Department of Human Services.

“The base building was monitored and approved by the Department of Human Services throughout construction, and they employed their own consultants and builder for the fit out process,” says Gary White, CEO of Batemans Bay Soldier’s Club.

Construction commenced in early 2010, with practical completion by October 2011. It was occupied and officially opened in May 2012.

A Building For The Purpose

According to Mr White, the department was seeking a building that was both aesthetically pleasing and provided an outstanding work environment.

The exterior façade is as striking as it is elegant, and features significant glazing to promote natural daylight penetration across all three levels. To counter the impact of solar heat gain on the interior, carefully orientated solar shading has been devised. Internally, each floor features a large, open plan floor plate with outstanding indoor environment quality, lighting and good airflow. This is achieved through the use of Daikin Variable Refrigerant Volume (VRV) Air-Cooled Heat Recovery systems, in conjunction with outside air economy cycles on interior zones only. Warm up, cool down and night purge cycles have also been designed into the system. According to Philip Jang, associate director with Wallis and Spratt, a number of considerations were given to the selection of the HVAC system and design, including site constraints, energy efficiency, capital cost and compliance with the department’s design brief. He says the VRV system offered numerous advantages over alternatives.

“No natural gas was available to the site, so the comfort conditioning system had to provide heating from another source of energy,” Jang says.

“The (VRV) systems have the ability to provide cooling and heating operations simultaneously from the same condensing unit, so therefore less plant equipment is required.”

Additionally, he says VRV systems are easier to commission compared to chilled water or heating water systems. They also provide for longer refrigerant piping lengths than standard split systems, and offer central control from one location, with the ability for remote monitoring if required. For a given capacity output, Daikin VRV also requires fewer condensing units than a conventional system, helping to reduce maintenance costs and the amount and complexity of electrical switchgear required in the switchboard. Jang says the physical dimension of the plant equipment was also critical on this project, as were the sound levels that had to comply with the design brief and local council regulations. Six rooftop mounted Daikin VRV condensing systems service the building (two per floor), with a total system capacity of 523.1kWr. To counter the effects of corrosion due to the site’s proximity to the ocean, coil treatment was provided on each condenser, and stainless steel used on the first metre of outside air ducts.

The first floor is home to a Concierge Desk, as well as government agency staff including those with CRS Australia and Australian Hearing.

In addition to the energy efficient HVAC design, the building also features a number of elements to enhance its environmental credentials.

These include a significant solar PV (photovoltaic) array installed on the roof, and rainwater harvesting and storage to reduce the building’s potable water use. Recycled timbers and low VOC (volatile organic compounds) materials have also been used throughout.

According to Jang, among the many considerations given to the final HVAC design in order to comply with the Department of Human Services design brief was building management, control and monitoring.

“The comfort conditioning system equipment performance data had to be available and in the format suitable for energy simulation programmes such as TAS and Beaver,” Jang says.

By utilising Daikin VRV systems on the baylink building project, in conjunction with a Daikin Intelligent Manager System, these requirements were able to be met.

This control system also allowed Wallis and Spratt to remotely review the HVAC system performance and operation during the mandatory NABERS 12-15 month period of energy monitoring. A VPN connection to the system enables Wallis and Spratt to provide regular reports and advise of any HVAC system rectification works required to the client, architect and NABERS consultant.

Now over a year since the building was occupied, the HVAC systems have performed better than modeled, with the building maintaining 5.5 star NABERS Energy rating performance.

Modern office buildings are increasingly airtight and subject to greater heat loads thanks to computers, lighting, equipment and other modern office equipment. Depending on the solar heat gains, occupancy and equipment loads some areas within a modern office may even require cooling in the depths of winter.